Save brown bears from cruel hunting

Save brown bears from cruel hunting

The Trump administration wants to make it legal to lure brown bears to their deaths with food in the Kenai National Wildlife Refuge.1 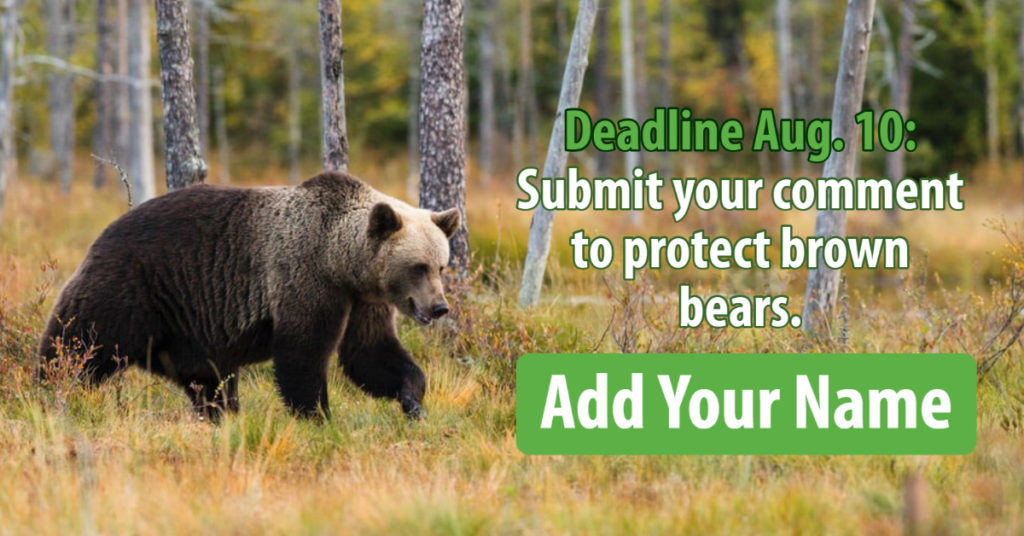 We still have a chance to save brown bears from cruel hunting.

This cruel decision will allow hunters to take aim at “bait stations” stocked with pastries, dog food soaked with bacon grease, or other irresistible treats. Unwitting bears will file right into hunters’ sights in search of the tempting food.2

A wildlife refuge should be a safe place for bears to thrive. This rule change puts the interest of trophy hunters over the safety of some of our country’s most incredible wildlife.

We still have a chance to stop this cruel decision from being finalized — but we need to act fast.

Brown bears are some of the most magnificent animals in America. Towering as many as eight feet in height on their hind legs, with rich brown coats of thick fur, these giants are vitally important to the health of the ecosystems they call home.3

And the brown bears of the Kenai National Wildlife Refuge are in special need of protection. The bears living on the Kenai Peninsula are a unique population, distinct from mainland bears.4

Now, this unique population’s home is on the brink of transforming from a sanctuary into a death trap.

Take action to save brown bears.

The Alaska Department of Fish and Game has long warned people that not feeding bears is “the most important thing we can do to prevent conflicts and confrontations between bears and people.” Bears that form the habit of eating food left by humans are a danger to humans — and in danger from humans.5

That’s why it’s against the law to feed bears in most of Alaska — it’s dangerous for bears (and for people).6 So why should it be legalized within the confines of a wildlife refuge, specifically for the purpose of luring bears to their deaths?