Unless we reverse current trends, lions are in danger of extinction. 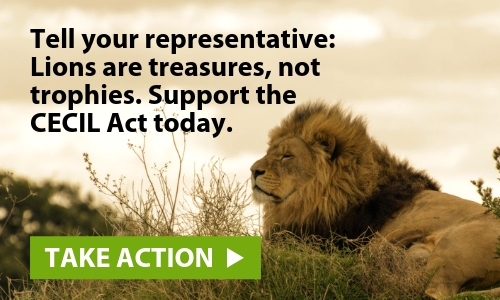 Now is our chance to protect lions.

Who can forget Cecil the lion, who died a tragic death at the hands of a big-game hunter in 2015 and captured the world’s attention?1

Now, there’s a bill in the House of Representatives under his name, the Conserving Ecosystems by Ceasing the Importation of Large Animal Trophies (CECIL) Act, which would protect vulnerable animals at risk of extinction from being hunted for sport by preventing the importation of hunted trophies into the U.S.2

Lions and other at-risk wildlife should be able to thrive — not spend their lives fighting for survival.

According to one estimate, the lion population has declined by 42 percent in the last two decades.3 Now there are as few as 23,000 of these majestic creatures roaming the Earth.4

And the Trump administration has been making the future of African lions even less certain — reversing a ban on lion and elephant hunt trophies last year, then issuing dozens of permits to bring lion parts back into the United States.5,6

How You Can Help:

Our children and grandchildren should have the chance to see lions in the wild, or even just know that they inhabit this amazing planet.

How can we protect lions? We need to do everything we can to preserve and enlarge their natural habitat, and create systems that encourage people to protect, not kill these creatures. To get there, we need to stop incentivizing hunting. We need to make the ban on bringing back “trophies” from killing these vulnerable animals permanent.