Polar bear mothers and cubs are in danger

Polar bear mothers and cubs are in danger

In the Arctic National Wildlife Refuge’s coastal plain, pregnant polar bears build dens in the snow to give birth and nurse their young.1 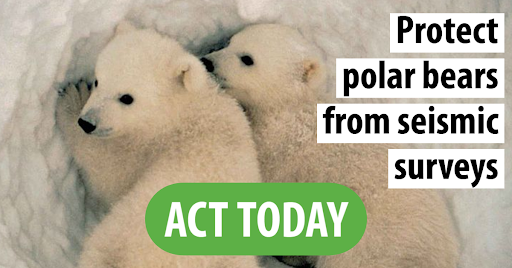 The polar bear mothers and cubs denning in the Arctic Refuge could soon face the terrifying threat of seismic surveys, which have a 1 in 5 chance of killing or injuring a polar bear.2

The U.S. Fish and Wildlife Service is about to authorize seismic surveys in the refuge — unless wildlife advocates like you speak out against this proposal by making a public comment before the Jan. 7 deadline.

In the pristine coastal plain of the Arctic Refuge, polar bear mothers should be able to protect their young in peace. At birth, a polar bear cub is extremely vulnerable — they’re born blind, hairless and deaf, weighing only one pound.3

These polar bear cubs would be helpless against the 90,000 pound “thumper” trucks that would drive 62,000 pounds of peak force into the tundra to find oil deposits during seismic surveys.4

Seismic surveys would impact the refuge’s landscape for decades, scarring the tundra and potentially killing polar bears in the process. Yet, the Trump administration’s proposal called the seismic survey’s impact on polar bears “negligible.”5

Speak out to save polar bears.

Opening the Arctic Refuge to oil and gas companies would be catastrophic. Not only would seismic surveys and subsequent drilling hurt polar bears, they would destroy the habitats of incredible species that live in the coastal plain, including the Porcupine caribou herd, grizzly bears and migratory birds.

If these seismic surveys are authorized, the Trump administration will be one step closer to opening the Arctic Refuge to drilling.

We need to tell the U.S. Fish and Wildlife Service that we can’t trade in this priceless animal habitat for a little more oil.