The Arctic National Wildlife Refuge is a safe haven for polar bears, caribou and countless migratory birds. It’s a special place, but there could be dark times ahead for the Arctic Refuge if we don’t act. 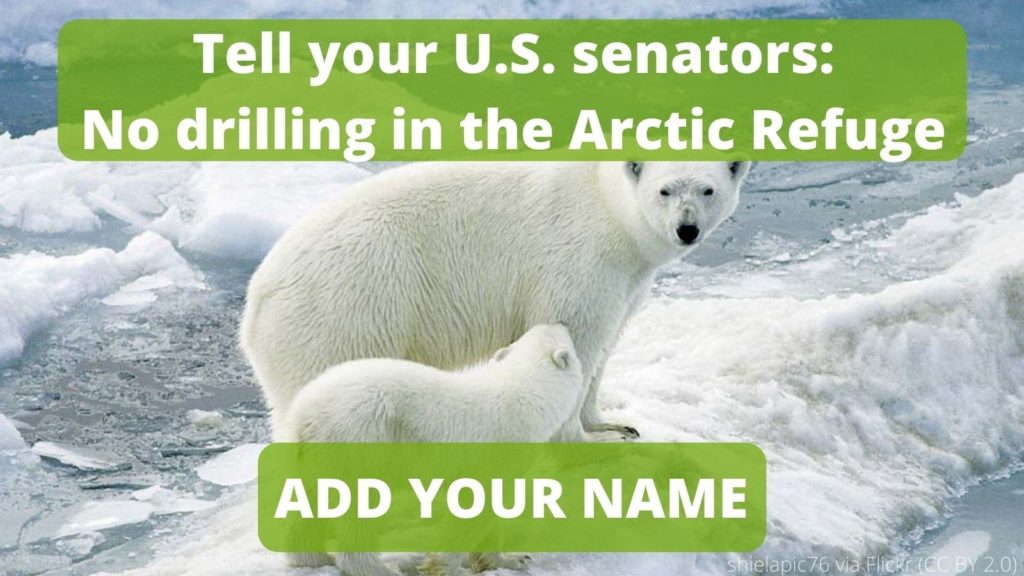 Our senators can protect the Arctic Refuge from drilling.

Under a 2017 law, hundreds of thousands of acres of Arctic Refuge land were opened for oil and gas drilling. The Biden administration temporarily halted oil and gas leasing in the refuge — but it’s up to Congress to permanently protect this special place.1

We need to tell our U.S. senators to permanently protect the Arctic Refuge in order to ensure a safe future for this irreplaceable ecosystem.

The Arctic is an irreplaceable ecosystem.

The coastal plain of the Arctic Refuge teems with life. Nearly 200,000 Porcupine caribou winter there, more than 200 species of birds nest there at various times of the year, and it’s one of the only national wildlife refuges that’s home to all three species of North American bear (black, brown and polar). It’s particularly vital for polar bears, which come to the Arctic Refuge to den and give birth to their young.2,3,4

Using the land for oil and gas drilling would defeat the purpose of a wildlife refuge.

Exploration and drilling would mean roads, heavy machinery and loud vehicles disrupting this once pristine haven for wildlife. Even if they don’t find any oil to drill, the process of searching for it puts wildlife at risk. The technology oil and gas companies use to detect and avoid polar bear dens works less than half the time, meaning that the risk of crushing the dens while conducting seismic surveys is high.5

Under a law passed in 2017, the Interior Department was required to sell oil and gas drilling leases on at least 800,000 acres of Arctic Refuge land by 2024.6 President Biden has temporarily halted oil and gas activity in the refuge — but, as long as that law is on the books, the Arctic Refuge is in danger.

The current U.S. Congress looks different than it did in 2017, and we’re hopeful we can get that law reversed. Tell your senators to permanently protect the Arctic Refuge.