The next Presidential #DemDebate is tonight, March 9, in Miami, Florida. It’ll be the second time Bernie Sanders and Hillary Clinton have met this week – and their eighth debate of the primary election.

Univision will broadcast the debate in Spanish with Maria Elena Salinas and Jorge Ramos of Univision moderating along with Karen Tumulty from their co-host The Washington Post. There were some dramatic results to the Primary elections in Michigan  – Sanders eked out a polll=prediction defying win – and Mississippi – where Clinton racked up a more than 60 point victory to claim the lion-share of the night’s delegates.

With Florida’s primary on March 15, and over 200 delegates at stake, tonight’s debate should be exciting! Will Clinton be forced to retool her message to address the clear and present danger climate change poses coastal Florida? Will Sanders bring up his plan to ban fracking after it drew big applause at Sunday’s debate? Anything is possible – but it’s much more likely if you ask for it! So send a question to tonight’s moderators using the links below, and then tune in with us to see what happens!

We previously gave Grist a lists of the kind of questions we’re hoping to asked at the #DemDebate. While we got 1 or two of them on Sunday in Flint (click here for a replay of that amazing environmental justice event) there’s still more!

Here’s the rest of the list in case you want to suggest any of them to our friends at Telemundo and CNN. (h/t the amazing Rebecca Leber and team at Grist). 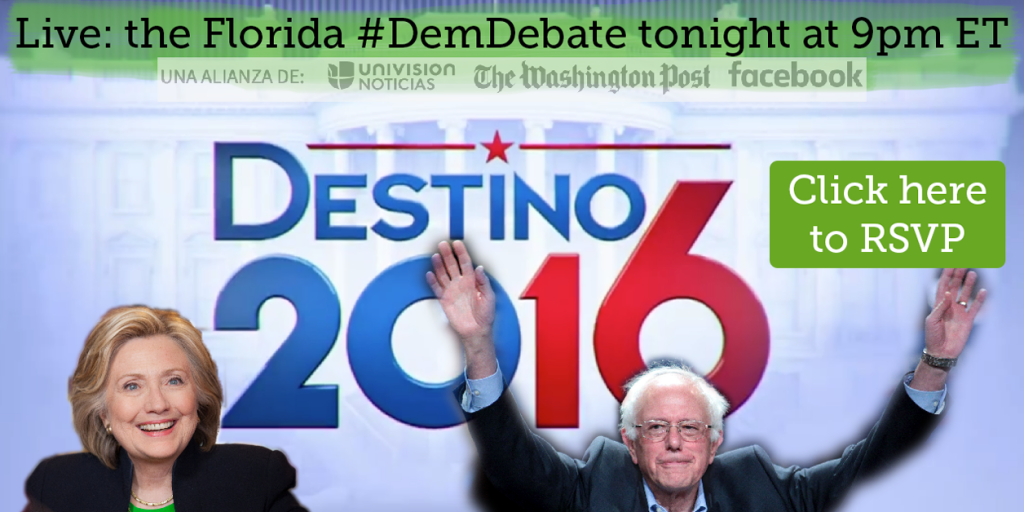