Join us LIVE for the last #DemDebate before New Hampshire votes!

Join us LIVE for the last #DemDebate before New Hampshire votes!

With the field pared down to two Democratic presidential candidates, former Secretary of State Hillary Clinton and Vermont Sen. Bernie Sanders square off Thursday night for a final head-to-head #DemDebate on MSNBC before the first primary (not caucus) in the nation is held in New Hampshire.

The debate, set for the University of New Hampshire in Durham, begins at 9 p.m. ET. It will be moderated by NBC News’ Chuck Todd and MSNBC’s Rachel Maddow. RSVP below to join us tonight!

Live Blog Join us for the last #DemDebate before New Hampshire!

The voters are finally being heard. The Iowa caucuses were a real squeaker with the two Democratic front-runners, Sen. Sanders and Sec. Clinton finishing so close to one another that some of the precincts were decided by coin tosses. It’s now clear that this ballgame will be played the full nine innings. With the suspension of Gov. O’Malley’s campaign, Sanders and Clinton are now in a two person race for the Democratic nomination. Tonight is their first face off since Iowa and we want to watch with you!

Many new themes may be discussed now that it’s a two person race: Both candidates have been sparring over social media, in the news and on campaign stops about who’s more progressive. But we haven’t gotten to their differences on how best to protect our climate. Will either of them commit to keeping 80 percent of fossil fuels in the ground or ending subsidies to the fossil fuel industry? There’s only one way to find out — tune in and watch the debate with us at tonight at 9 PM EST. 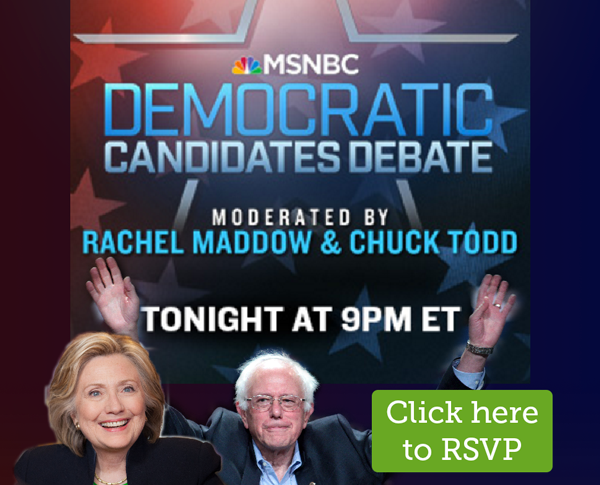 This is the last time that voters in New Hampshire will see a live, televised debate before they vote. I sincerely believe it could change the whole scope of the election. Let’s find out together which direction it goes as we get closer to electing the successor to President Obama.