Summer 2018 may be over, but it brought home a powerful lesson. The climate crisis has arrived, and it’s ugly. Cleaner cars can help head off the worst-case climate crisis scenarios. But will Americans speak out for reduced carbon emissions and improved fuel efficiency? 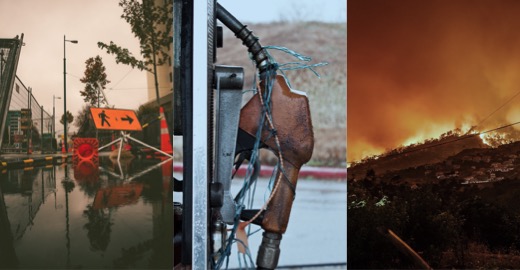 Nonetheless, The Trump administration is doubling down on gas-guzzling cars and more auto emissions that feed the global climate crisis.5

Car emissions collect in the atmosphere, trapping heat and fueling climate change. And U.S. autos play a major role in the worsening climate crisis. In fact, the US is responsible for more climate change-causing carbon emissions than any other country in history.

The proposed delay would mean that an extra 321 million to 931 million metric tons of carbon dioxide would be emitted. And it would unleash those greenhouse gasses as climate change increasingly threatens wildlife, wild places, and the lives and livelihoods of people around the world.7,8

Worse, a major new scientific study says that we may soon reach a point of no return. Unless we take dramatic action soon, we may no longer be able to avoid the most devastating climate change scenarios and biomes around the world will become unrecognizable.9

The good news is that — despite the Administration’s current position — there is a real chance we can win this fight.

Serious questions have been raised about some of the proposal’s underlying assumptions.10 And it’s hard to imagine Americans embracing a proposal that would have them buying more gas and paying more at the pump.

Tell the Trump administration that Americans want cars that pollute less and reduce our use of fossil fuels.

We Don’t Have Much Time

Climate change will only get worse — for all of us — unless we improve vehicle fuel efficiency and take concrete steps to reduce carbon emissions from burning fossil fuels. Delay is not the answer.

The Environmental Protection Agency is now seeking public comments on an ill-conceived proposal to delay improved fuel efficiency and emissions standards until 2026.

Unfortunately, we only have a couple of weeks to collect as many signatures as we can in opposition of this proposal. Will you speak out?

1. Jonathan Watts,”Summer weather is getting ‘stuck’ due to Arctic warming,” The Guardian, August 20, 2018.

5. Brad Plumer, “How Big a Deal Is Trump’s Fuel Economy Rollback? For the Climate, Maybe the Biggest Yet,” The New York Times, August 3, 2018.

6. Justin Gillis and Nadja Popovich, “The U.S. Is the Biggest Carbon Polluter in History. It Just Walked Away From the Paris Climate Deal,“ The New York Times, June 1, 2016.

7. Brad Plumer, “How Big a Deal Is Trump’s Fuel Economy Rollback? For the Climate, Maybe the Biggest Yet,” The New York Times, August 3, 2018.

8. Jonathon Porritt, Caroline Lucas, Clive Lewis and 57 other writers, politicians and academics, “Climate change is real. We must not offer credibility to those who deny it,” The Guardian, August 26, 2018.