Enter Your Information Below:

Use the tool on the right to enter your phone number, and our system will call you back with some instructions. Please be patient as it can take a few seconds to call, and connect once you pick up the phone. When you’re ready, push “1” to be connected to the Capitol switchboard and make your call. Make sure to tell your Senators’ office that you want a clean bill to fix Flint’s water, not an amendment to this dirty energy bill.

We’ll keep a count of all the calls and report back to you after the vote. If you’re having trouble with the call tool? Click here to look up your senators and call them in D.C. directly.

If you need help thinking of what to say, Anthony’s email is below with lots of links and references to help:

There is no way to contain the outrage I possess for the situation in Flint, MI. Our friend and preeminent Environmental Justice scholar Dr. Robert Bullard referred to the situation as, “a blatant example of environmental injustice,” and added, “the more information comes out, the clearer it is that this community was not treated according to the usual protocols.” Film maker Michael Moore provided an even darker depiction of the reality facing the city’s population stating, “…you cannot reverse the irreversible brain damage that has been inflicted upon every single child in Flint. The damage is permanent. There is no medicine you can send, no doctor or scientist who has any way to undo the harm done to thousands of babies, toddlers and children (not to mention their parents). They are ruined for life…”

Meanwhile, our lawmakers have been pointing fingers at each other at the local, state and national level. Each trying to exonerate themselves from blame while the citizens of Flint are still being charged for lead-laced water. And while it’s been great to see the benevolence of so many who have sent Flint thousands of gallons of bottled water, it’s not a solution. That’s why nearly 20,000 of us have already told our senators that Flint needs pipes not plastic bottles — and it looks like they got the message, sort of.

Last week Senate Democrats introduced an amendment to the larger Energy Bill sponsored by Sen. Lisa Murkowski (R-AK) and Maria Cantwell (D-WA) that would allocate $400 million to fix Flint’s contaminated water pipes. On the surface this seems like a great idea, and just what we’ve been asking for. But our wish would come at the price of an Energy Bill that subsidizes coal and increases fracking. That’s why I need you to call your Senators today and tell them: Don’t Use Flint As a Political Chess Piece. Click here to make the call. 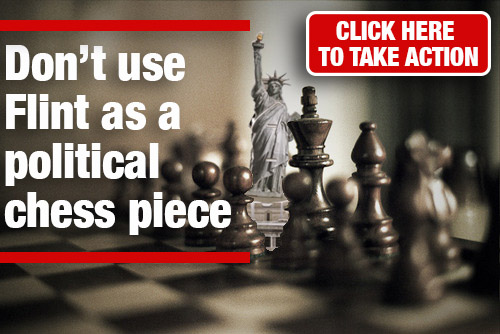 I’m sure you know the saying, “No good deed goes unpunished.” If this amendment is attached to the Energy Bill, it will epitomize this cliche — and our climate would be punished the most. The Secretary of Energy would be forced to expedite exports of liquefied natural gas (LNG) only 45 days after a Federal Energy Regulatory Commission (FERC) review. And the dying coal industry would be propped up by hundreds of millions in new subsidies at a moment scientists tell us we must leave fossil fuels in the ground.5

Proponents of the dirty energy bill could allow the Flint Amendment to pass, because it would help them sell their plan to give billions in profits to Big Oil and King Coal. Flint deserves justice, clean water and a 21st Century infrastructure, but teh Senate shouldn’t hold a lnG(un) to their heads to make it happen. The Senate should instead ditch this dirty energy bill and consider a clean bill that only addresses Flint’s infrastructure. That way we can do what’s right without climate killing emissions that disproportionately impact low-wealth communities of color like Flint in the first place.

We have no time to lose. The Senate is working fast to approve an Energy Bill as tainted as Flint’s pipes by the end of the week, and we need to speak now to stop this meretricious amendment from being included. Click here to call your senators and let them know they shouldn’t even think of partaking in a classic case of Quid Pro Flint.

Thank You for Sounding Off,