Enter Your Information Below:

Senate negotiators and House Republicans have struck a deal to overhaul chemical safety laws, and a vote could happen this week — But there’s a toxic pill in the bill. Unless we speak up, Congress will approve an update to the Toxic Substances Control Act (TSCA) that makes it harder for states to regulate or ban dangerous chemicals in our food and products. Call now at tell your Congressperson and Senators now and tell them to oppose any TSCA reform that pre-empts our states’ right to protect us from more toxic chemicals than the next EPA sees fit.

Use the tool on the right to enter your phone number, and our system will call you back with some instructions. Please be patient as it can take a few seconds to call and connect once you pick up the phone. When you’re ready, push “1” to be connected to the Capitol switchboard and ask for your member of Congress. You can reload this page up to three times to call your Congressperson & both of your Senators. Make sure to tell each office that you want them to vote NO on the ToSCA bill that weakens our states’ right to regulate or ban more toxics than the EPA.

We’ll keep a count of all the calls and report back to you after the vote. If you’re having trouble with the call tool: click here to look up your senators and call them in D.C. directly.

If you need help thinking of what to say, Drew’s email is below with lots of links and references to help:

Senate negotiators and House Republicans have struck a deal to overhaul our decades-old chemical safety law, known as the 1976 Toxic Substances Control Act  (TSCA). At stake are the rules for what chemicals are allowed to be used in everything from food containers to children’s toys and a heck of a lot more.

Votes are expected to start tomorrow, and could be wrapped up this week. But there’s a toxic trick hiding in this so-called-bipartisan fix: The bill being voted on right now would prevent state and local governments from enacting tougher standards than the EPA. And that’s a big problem since the EPA has only reviewed a few hundred chemicals for safety, while nearly 85,000 chemicals are being used right now that we know nothing about.

Some Democrats like Senator Bernie Sanders (I-VT) and officials from five states — Connecticut, Minnesota, New Hampshire, New York and Washington — have all come out in opposition.

But we’re running out of time to fix or stop this toxic reform before it’s released into our ecosystem!

Use this page to call your member of Congress, and then your Senators, to tell them to oppose any TSCA reform that would prevent states from enacting tougher standards than the EPA. 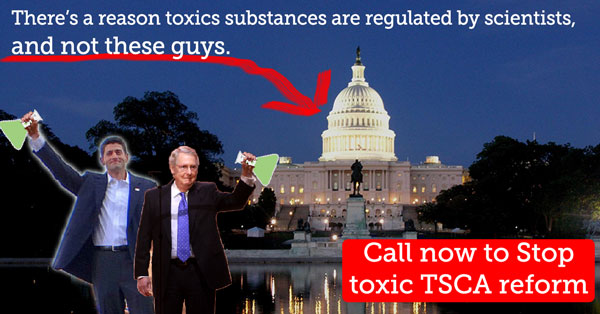 Nobody denies that  TSCA is badly in need of reform. It’s the main federal law governing the “safe” use of thousands of chemicals we are exposed to every day. But the 1976 law grandfathered thousands of chemicals that were already on the market, including asbestos. The current law also made it really hard for the EPA to consider, regulate or ban new chemicals as they were released onto the markets.

That’s why, since the 1970s, most of the work to protect consumers and the environment from toxic substances has been happening at the state and local level. That progress is what’s at stake in this week’s Congressional votes.

But you don’t have to take my word for it: But you don’t have to take my word for it: Paul Tonko, the ranking Democratic member on the House Environment and the Economy Subcommittee who is opposing the bill, said “We have negotiated in good faith to try to reach an agreement to fix EPA’s chemical program. And while there are positive aspects of this bill, ultimately, it is inadequate.” Likewise, Senator Bernie Sanders, whose home state of Vermont is already a leader on regulating Toxic Chemicals, says the bill makes it “more difficult for states to set new, stricter standards … federal chemical regulations should be a floor, not a ceiling. States should not be stopped from going above and beyond minimum federal safety standards.”

Tonko, Sanders and other leaders in Congress are fighting for our health and the health of the planet by standing up for TSCA reform that protects states’ rights to go beyond the EPA rules. But they need our help to stop the House Republican Caucus and Senate compromise-crats. Use this page to make a phone call and tell your member of Congress, and then both your Senators, to oppose any TSCA reform that prevents States from taking stronger action than the EPA.