Bee a voice for our most important pollinators

Bee a voice for our most important pollinators

Forty-seven states have yet to ban the most dangerous uses of bee-killing pesticides called neonicotinoids. 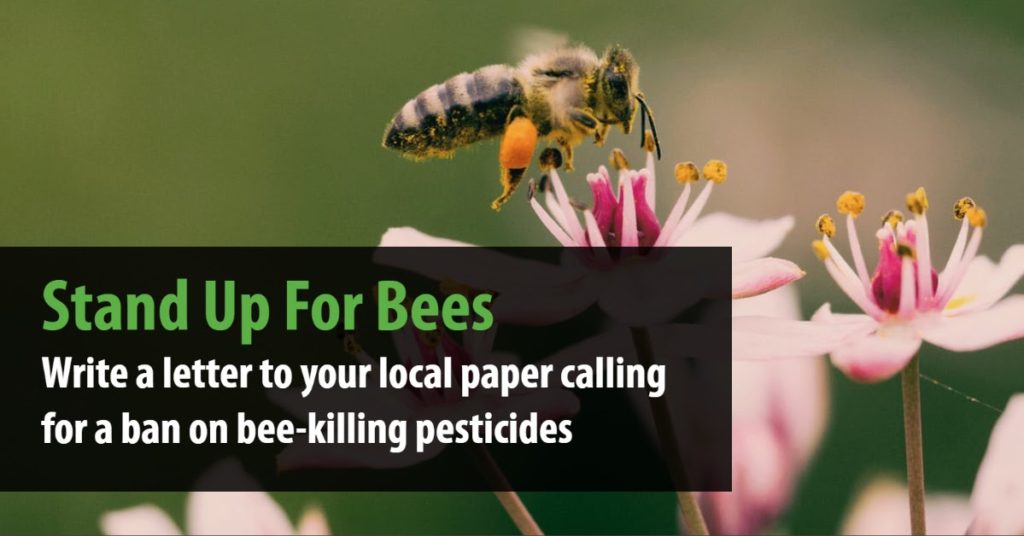 States can do more to protect bees.

This was one of the main conclusions of our recently released Beeport Card. Despite a growing body of research linking neonicotinoids to mass bee die-offs, an overwhelming majority of governors have yet to take action.

You have a platform — and the power to help us win our ongoing movement to protect bees from neonicotinoids. Today, you can start a letter to the editor of your local paper to stand up for bees.

Honeybees are in trouble — but you can help.

The threat of colony collapse deserves immediate attention from our policymakers. Domestic honeybee hives have dropped from 6 million colonies in the 1940s to about 2.5 million today.1

Large scale colony collapse has dire consequences for our environment and global food supply. However, there is still hope for bees. Together, we can protect our most important pollinators by voicing the need to restrict bee-killing pesticides.

Send a letter to the editor of your local paper.

While our Beeport Card found that the majority of states still need to act to protect bees, it also demonstrated that change is possible. Three states — Maryland, Connecticut and Vermont — have passed laws banning consumer use of neonicotinoids.3,4,5 Now we’re asking for your help to make your state next.

Your personalized letter to the editor will demonstrate the local need to protect and defend bees from neonicotinoids. It can also encourage your governor to respond publicly and act on your concerns.

Write a letter to your local newspaper calling on your governor to ban consumer use of bee-killing pesticides.