It’s birthing season for the North Atlantic Right whale, a time of both hope and danger for the critically endangered species. 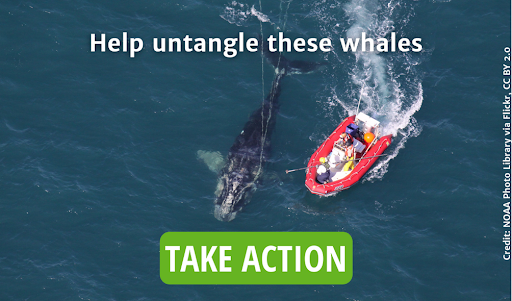 At least nine new calves have been born so far this birthing season, which typically lasts from December to March.1 This spring, they’ll face a perilous migration northward, where fishing lines, such as the vertical lines for traditional lobster traps, could result in a painful — and even fatal — entanglement.

To protect this species, we need to change the way we catch our seafood — and rope-free lobster traps represent a whale-friendly alternative that could do real good for the Right whales. Red Lobster is one of the biggest purchasers of seafood in the world. By committing to getting lobsters only from rope-free sources, it could set a new industry standard and help protect one of the ocean’s most vulnerable mammals.

We need to tell Red Lobster to do its part to protect our Right whales.

The day after Christmas, researchers spotted a whale named Tripelago off Georgia’s coast — and swimming in her wake was a newborn calf. Tripelago’s baby makes the ninth North Atlantic Right whale calf of this birthing season.2

That’s good news for a species that’s battling extinction, particularly in light of several bad seasons over the past decade when very few calves were born — if any were born at all.3

But these whales still face a gauntlet of challenges that could erase in a moment all the hope that their birth brings.

Over the past half-century, entanglements in fishing lines, which wrap themselves around the whales like snakes and slowly constrict the animals to death, have taken a severe toll on North Atlantic Right whales. Since 2009, nearly 3 in 5 Right whale deaths with a known cause have been caused by fishing lines.4

Recently, we’re even seeing that fishing lines are hampering the species’ reproduction — and with it, their only chance at recovery. When a young mother becomes entangled in ropes, much of the energy she would spend on raising and caring for her calf must instead be diverted to dealing with her entanglement — towing hundreds of pounds of fishing equipment and healing from gashes caused by ropes that slowly saw into her flesh. As a result, fewer Right whales are being born, and those that are born are noticeably smaller than they were in past generations.5,6

One thing is clear: If North Atlantic Right whales are to survive, more calves need to be born, and more need to survive long enough to produce calves of their own. This can’t happen with our current rates of entanglement.

This new technology can reduce the danger to Right whales posed by fishing lines.

So-called “ropeless” traps would allow fishermen to keep bringing in their catch without placing Right whales — and other vulnerable sealife, including humpback whales and leatherback sea turtles — in harm’s way.

With this technology, ropes wouldn’t stretch from the ocean’s surface to floor for days or weeks on end, leaving Right whales at risk of entanglement.

This technology exists right now, and little would help this technology spread throughout the industry faster than if one of the largest purchasers of seafood in the world only bought from fishermen that used ropeless traps. That’s why we’re calling on Red Lobster to do right by our whales and set a new industry standard for safe fishing.