Add your name to help save spotted owls

Add your name to help save spotted owls

The spotted owl is a beautiful bird, its chocolate-brown feathers dappled with white speckles like snowflakes. They’re an amazing part of forest ecosystems of the Pacific Northwest — but they’re in trouble. 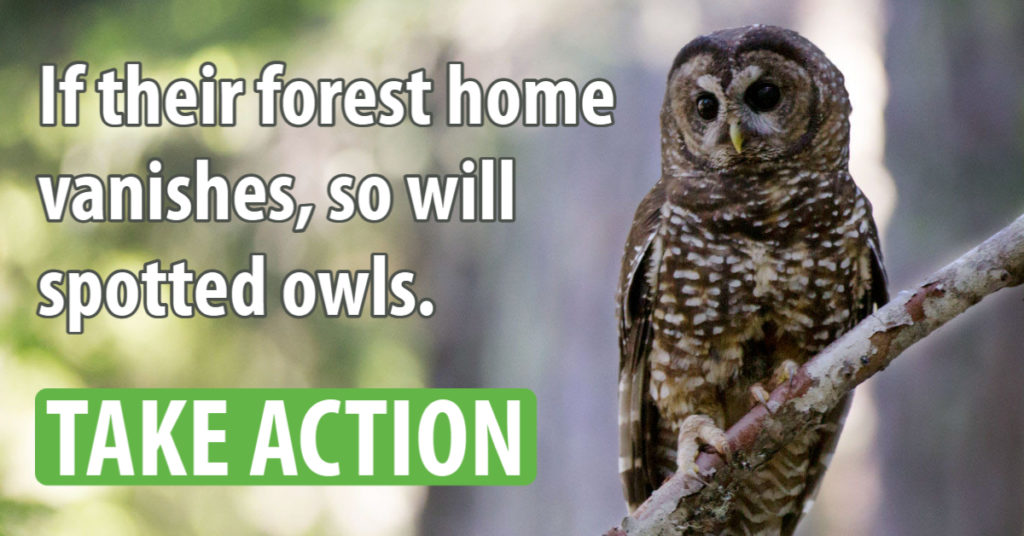 Spotted owls have lost 70 percent of their habitat.

Spotted owls have lost 70 percent of their habitat — and without more federal protection, they could go extinct.1

The owls depend on healthy forest habitat for survival. The Biden administration is taking comments from the public right now as it decides whether to restore protection for over 3 million acres of forest the spotted owls need.2

Take action today to help save spotted owls from extinction.

Logging threatens owls — but we can help.

Last year, the Trump administration stripped protection from 3.4 million acres of spotted owl habitat — even though the Fish and Wildlife Service announced in December that it knew the owls needed more protection to avoid extinction.3 That’s an area three times the size of Grand Canyon National Park thrown open for logging and development.

Logging transforms healthy forests into barren landscapes empty of everything a spotted owl needs to survive. The impact is brutal: In Washington state, 77 percent of spotted owls have died.4

Add your name to help protect spotted owls from extinction.

Habitat loss harms spotted owls in many ways. As their forest shrinks, competition for food and resources increases. And with too few trees around, spotted owls could even struggle to learn to fly.

When a baby spotted owl learns to fly, it starts by “branching” — leaping from branch to branch in its forest home to get the hang of using its wings. A healthy forest home is vital for allowing young spotted owls to successfully take to the sky.

We can save the spotted owl’s forest home by taking action today.