A bill to save the Endangered Species Act

A bill to save the Endangered Species Act 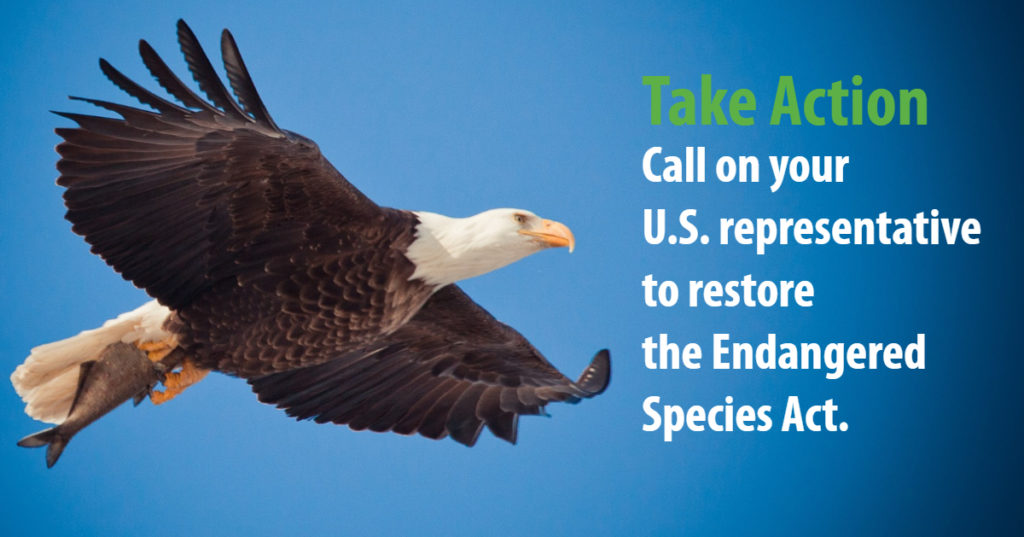 The Endangered Species Act is vital.

For more than 40 years, the ESA has been the nation’s bedrock conservation law — and Environmental Action is working to ensure it can continue to defend vulnerable wildlife for generations to come.

We delivered more than 13,500 messages from Environmental Action supporters to the U.S. House of Representatives, calling for legislation to restore full protections to the ESA. Congress listened and introduced a bill to repeal President Trump’s rollbacks.2 Now, we need your help to ensure that this bill becomes law.

This bill could make a huge difference.

The PAW and FIN Protection Act of 2019 reverses rules that would make it easier to remove a species from the endangered list and weaken protections for threatened wildlife. It also blocks policymakers from considering costs when deciding to list a species.3

Blocking dramatic rollbacks to the ESA is critical to ensuring that vulnerable wildlife receive the complete defense they deserve. In its original form, the ESA has prevented more than 99 percent of listed species from going extinct. It is thanks to this law that the bald eagle, humpback whale, American alligator and more have been brought back from the brink of extinction.4

Our planet is in the midst of a sixth mass extinction. In just the last 50 years, 60 percent of all wild animals on Earth have been lost.5 At a time of unprecedented extinction and habitat destruction, we should be working to strengthen — not weaken — this critical law.

Call on the U.S. House of Representatives to pass the PAW and FIN Protection Act.