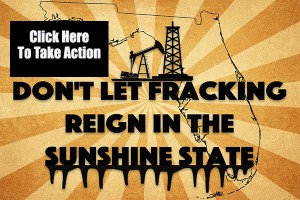 Thanks to the hard work and dedication of members like you, last week we struck a hard blow to fracking in Florida. On Thursday the State Senate Appropriations Committee voted, in bi-partisan fashion, 10-9 against Senate Bill (SB) 318 that would expand the extreme practice throughout the state and prevent local communities from banning it. But it’s not over yet, it’s actually pretty far from over. Senators on the losing side used a parliamentary loophole that allows the bill to be reconsidered — and it will be voted on again next Tuesday.

Now that SB 318 is up for “reconsideration,” Big Oil probably spent the whole weekend lobbying Senators and doing all they can to push through their fracked up agenda. That’s why we’re teaming up with our friends at ReThink Florida’s Future, Environment Florida, Sierra Club and Floridians Against Fracking to reach out to select Senators with our own message: Stop The Potential SB 318 FrackFlop.

Here’s some sample language you can use when you call:

Senator, I was pleased to see that SB 318 was not approved the last time it was voted on in committee. Florida is no place for fracking, it would put our drinking water, air and public health at too much risk. And no bill should prevent local communities from banning fracking near their homes, schools and businesses. Further, I am concerned about what widespread fracking would do to our important tourism industry. That’s why I urge you to vote “No” on SB 318 when it is reconsidered next Tuesday. Please do the right thing for Florida and our future.